Peacock Mantis Odontodactylus scyllarus has nothing to do with peacock, nor a mantis, nor a shrimp. But just a kiss-ass creature all on its own. The peacock refers to the colorful appearance and the signature “eyes” on its tail that resembles a peacock’s tail. The mantis part refers to its front appendix that not only shapes but also functions like that of a praying mantis insect. Finally, as you can imagine, it’s easy to mistaken it as a shrimp as it possess many qualities of a common shrimp. 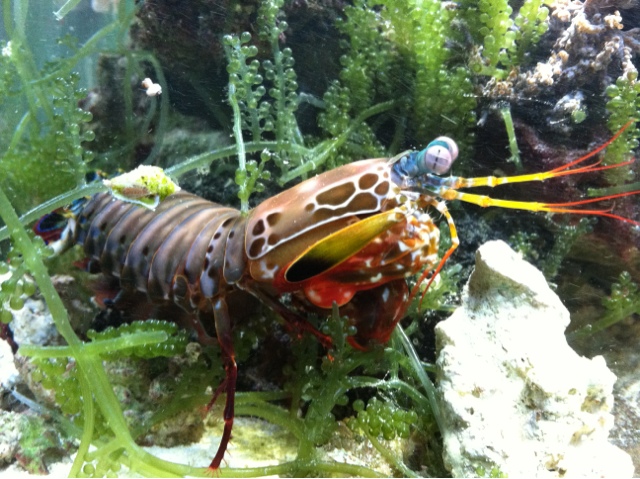 I have been wanting one of these for quite a long time but have not had one for several reasons: 1) they aren’t exactly every popular in aquarium trade 2) depends on the source they can be quite pricy 3) they require absolute solidarity and can harm their owners if you don’t know what you are dealing with. 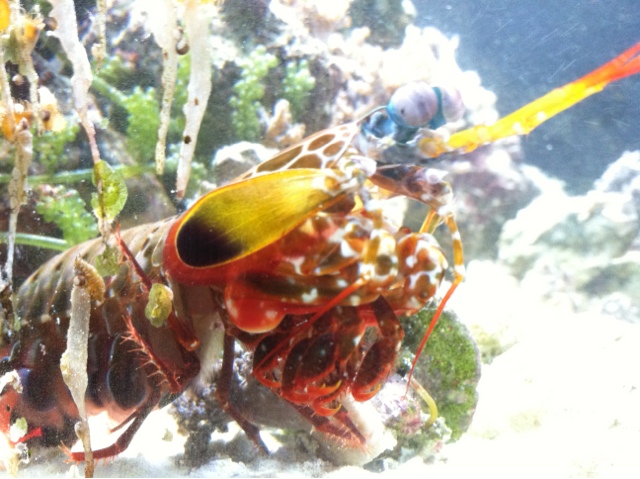 It’s only been one day since this little guy has been in this 24gallon species tank that has nothing but the mantis along with liverock, some soft coral, macroalgae, and some micro snails. I have prepared a crevice for it, but the little dude was so busy all night “remodeling” it by moving rocks around and puffing out sand. By morning the “cave” is officially a “burrow”. They are “reef safe” by the way to a certain degree, that is they will not touch any sessile invertebrates such as anemone or corals, but will readily consume any crustasian, fish, snail, hermit crab, etc that are living alongside them. 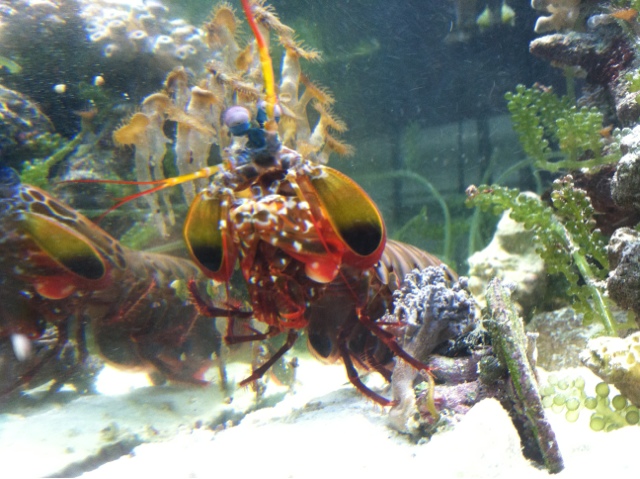 There are two types of mantis- the slicer and the splitter. The slicer has razor sharp claws that can slice a fish into two halves before consuming them. The peacock mantis belongs to the splitting group: using its pair of hammer shaped claws, they “punch” the prey with up to 180lb force to either knock them out cold or to split the shell (even clams and snails) before consuming them. Another awesome feature is their two perky eyes- the most complex pair of eyes in the animal kingdom that can see 4 times more “things” than human, including 12 difference color channels (UV and IR included), how neat is that?