The Largest Duncan Coral I’ve ever seen is right here in my fish tank. Duncan coral (Duncanopsammia axifuga) has become very popular in the aquarium trade recently. Not only it is pretty to look at, it is also very easy to maintain, grows fast, and can be readily propagated with little to no effort. I have originally purchased my three head duncan from the local aquarium store, each polyp at the size of 1 inch across. That remained true for a short while. The duncan coral has grown to be a monster after about eight months in my fishtank. It has grown a few more heads since then. The most important part, each head has ballooned to be at least 3 inches across each with long sweeper tentacles up to 4 inches.
Most people thought it is a colony of anemones before I explained what it is to them. I keep my duncan under 250W metal halide with 2X24W Actinic T5, 2X24W Colormax T5, and 2 strips of 12W Magenta and 420nm LED with moderate water flow. The one thing I have to say though, I feed each head half a shrimp (the kind you eat in your dinner) weekly, and they LOVE it! The only maintenance I have to do is actually trimming the sweeper tentacle that stings the surrounding corals. I use my metal tongue to just “snip” the extra long ones off. 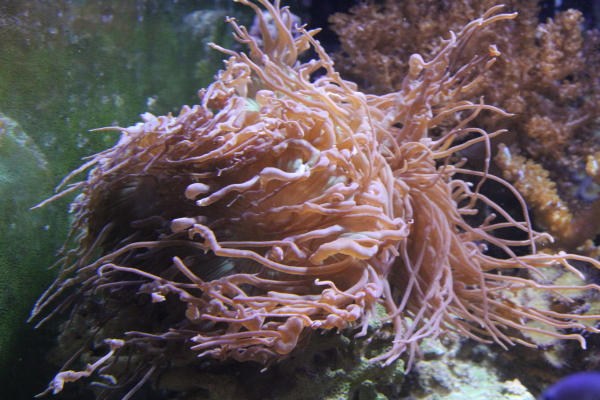